Experience the epic highs and lows of high school volley ball anime in...

Based primarily on Haikyu!! with influences from other sports anime VB!! presents the opportunity for players to play through the character arcs of a sports anime.

Mechanically drawing from the No Dice No Masters system by Avery Alder, VB!! is a GM-less token based game that provides the tools and space to explore the character dynamics of adolescence in a team oriented environment.

Included is a complete 30-page rule book in .pdf and .txt formats with 7 player-archetype playbooks, guidance on running the game as a group for the best play experience, and (COMING SOON!!) a link to a form fillable google sheet character keeper to facilitate online play.

Special & overwhelming thanks to

In order to download this game you must purchase it at or above the minimum price of $8 USD. You will get access to the following files:

If you are interested in Volley Boys!! and cannot pay the minimum listed price at this time feel free to grab a Community Copy made available with each purchase of the game.

Volley Boys is a high school volleyball team anime trpg, influenced by material such as Free!, Sk8 The Infinity, and Haikyu.

The PDF is 34 pages and relatively easy to read. There's no illustrations, and I think they'd add a lot, but Volley Boys is quite formidable even without them.

Mechanically, Volley Boys is built on No Dice No Masters and Pasion De Las Pasiones. To that end, the goal of play is to tell a good, compelling story, and there aren't a lot of mechanics jumping in the way of that.

Anyone can GM. Anyone can move NPCs. NPCs don't roll. Players don't really roll either. Player characters are based on playbooks, which do have Moves a la PbtA, but the Moves are token based. Do something powerful, spend a token. Do something weak, take a token. Effectively, the game's spotlight is managed through a sort of mini-economy, not through the whim of the dice.

Volley Boys is absolutely a homage to Haikyu, but it doesn't require you to be a fan, just to be willing to get swept up in that same kind of energy---where you're suddenly caring a lot about a sport, even if you didn't expect to. To this end, Volley Boys doesn't get bogged down in the technical play of the game. It wants you to focus on your characters' emotional states, and it's perfectly willing to let you handwave the exact rules in favor of good drama.

Overall, if you like enthusiasm, if you like character drama, and if you're willing to find yourself caring more than you thought about a sport now that it's seen through a personal frame, Volley Boys is for you.

VB!! is a wonderful homage to Haikyu!! and other sports anime. It takes the tropes of the genre and pairs it perfectly with No Dice No Masters.

Kevin does a clean job of highlighting all the important aspects of sports anime archetypes while still leaving space for player creativity. The game guides you if you want to play out your favorite anime, but easily gives space if you want to create something entirely new.

Something I really enjoyed about Kevin's authorial voice throughout is that it's equal parts encouraging cheerleader (getting players to find their own unique voice in the game) and amicable guide (with clear, focused instructions on how to play).

I absolutely love that he mentions using cinematic descriptions for scenes in the intro and then baked into moves are examples of cinematic framing. There's a strong reinforcement of ideas introduced at the beginning, that follows throughout the game. Really smart game design.

You get to see the genuine joy and care that Kevin has for the genre. Honestly one of the best things about picking up indie games, in general. With VB!! you get a piece of Kevin's perspective and that's just really lovely. Go pick up Volley Boys!

Fun and evocative of the genre. Clean and easy to read, it makes me want to play!

This game whips something serious and is not just a great game to tell basically any sports/team-based story in but also a great example of NDNM in a clear and directed way!

VOLLEY BOYS is just a succinctly perfect little thing. It's a fantastic NDNM game that brings in all the best parts of sports anime and a whole lotta very clear love and spirit of the genre and some specific shows.

Do yourself a favor and get it. 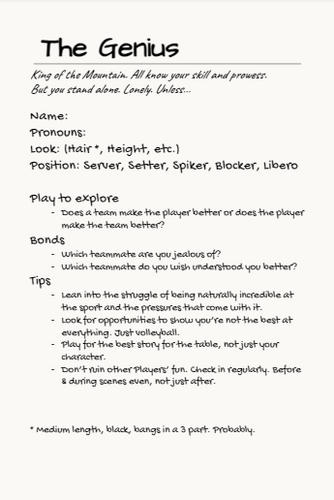 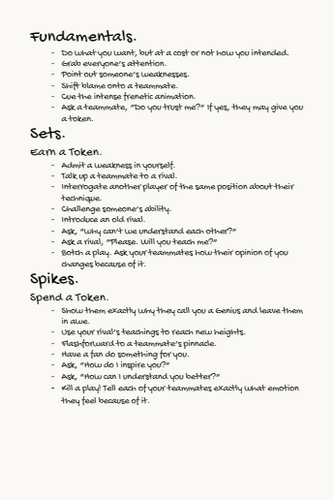 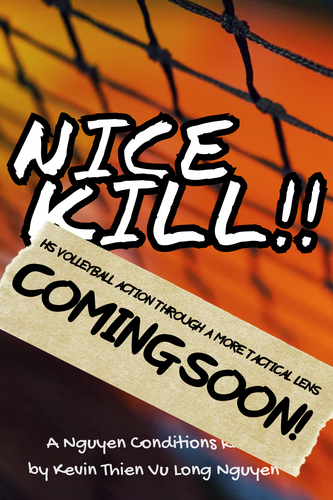