This game is about War, Pain, and Hate.

You warred with the Colonists.

You warred with yourselves.

Then the Imperials came to your “aid”. Your cousins to the North fight under the banners of the North Valley Army and with the (allegedly) radical Valley Commandos.

You and your family are residents of the Southern Capital, occupied by a coalition of the Army of the Republic of the Valley, the Southern state to which you belong, and the Imperial States Army, foreign soldiers.

Imperials never think of you as their equal.

You can only hope to see the otherside of the War.

So… They Took Our War is a game designed within the For the Queen by Alex Roberts framework for 3-6 players about living in a state of war. A specific state of war. One in which a foreign power has co-opted your land, forces, and cause for it’s own machinations. The war will take the lives of hundreds of thousands. For any hope to survive you’ll need to learn to navigate the new world order.

And even then you might not be lucky enough.

This game is meant to speak to a very specific experience that is part of a larger pastiche that is the War. It is not intended to speak for all experiences for all affected by the War or even all the experiences of any given individual during the war. The intention is to recenter the lens on the often overlooked and washed over experiences and perspectives of those often relegated to the background, supporting cast, or faceless antagonists of narratives about the War. While some of the prompts are exaggerated few are wholly fictional.

The conflict this work is based on was terrible to many groups including some systematically preyed on and forced to take part in the “police action” by a country that at the time and at the time of this writing did not treat them as equals to those in power. There were many victims but only a few true perpetrators who exploited the conflict for selfish gain and spilled the blood of innocents on all sides.

This work is based on For the Queen (found at http://www.forthequeengame.com/), product of Alex Roberts and Evil Hat Productions, and licensed for our use under the Creative Commons Attribution 3.0 Unported license (http://creativecommons.org/licenses/by/3.0/).

The X-Card was originally developed by John Stavropoulos and is adapted for use in this game. To learn more about The X-Card, visit http://tinyurl.com/x-card-rpg

A note about They Took Our War & Before the Boats

They Took Our War and Beyond the Boats are two games developed in conjunction with one another. There is significant overlap between the two, particularly with the prompts provided. Each offers, in the designers opinion, a unique experience.

They Took Our War, one of a group of people in a shared traumatic situation trying to get by.

Before the Boats, one of an individual trying to desperately survive.

Considering such both games are available as a bundle at a discounted price for those interested:  https://itch.io/s/32763/the-war

If you have purchased either but would like the other please get in touch with me directly and I will find a way to send you the sister game for the difference of the game you’ve purchased and the bundle.

If you are a marginalized person

And you want this game but cannot afford the price and there are no community copies at the time available please reach out to me directly and I will send you a copy at no charge, no questions asked.

In order to download this game you must purchase it at or above the minimum price of $15 USD. You will get access to the following files:

Each copy of They Took Our War purchased helps make more Community Copies available.
If you cannot afford the listed price of They Took Our War please feel free to claim a Community Copy if available.
If you appreciate the game please consider leaving a review of 5 stars on the game's itch page and letting the designer know your thoughts via Twitter. 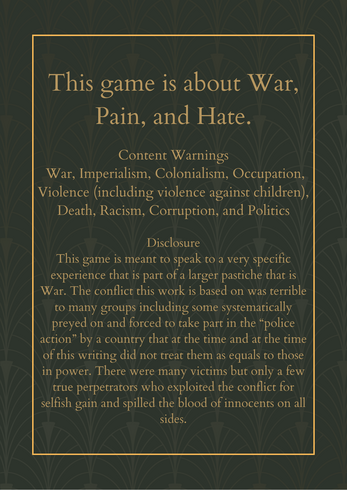 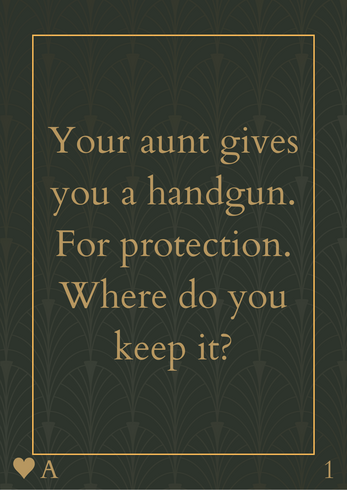 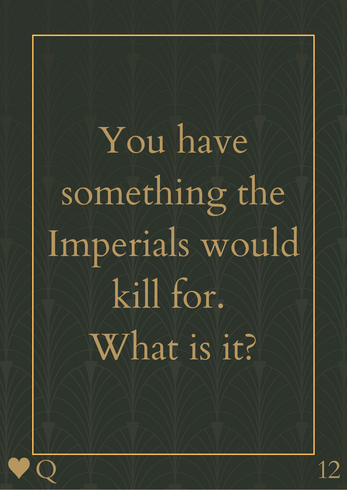 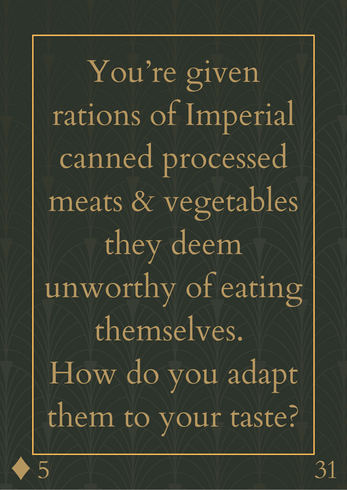